It is fitting that the Yellowstone River is the longest free-flowing and undammed river in the lower 48 states. Perhaps most known for its annual hatch of salmonflies in late June and early July, the Yellowstone River is also home to an abundance of insect species and is world-famous for producing high-quality fish and plenty of them. Due to the river’s water quality and natural habitat, it harbors large populations of mayflies, stoneflies, caddis, and more. The Yellowstone River is a free-flowing river and susceptible to naturally occurring annual variations in stream flows and channelization, but it's hatches are consistent and prolific. 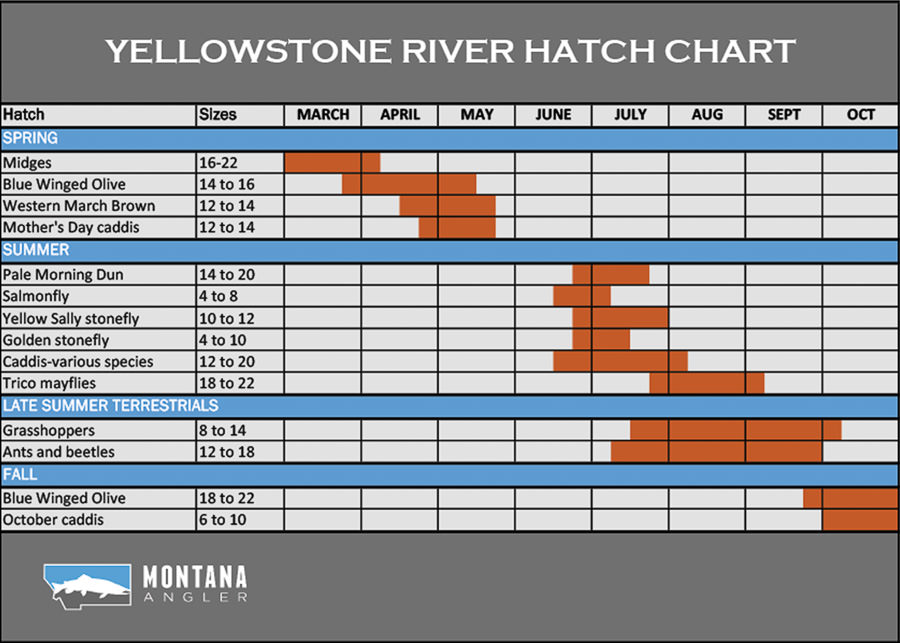 These mayflies hatch in spring and fall on the Yellowstone River from Gardiner downstream to Billings, with the strongest hatches occurring from the Yellowstone Park Boundary to Columbus. Beginning in late March and lasting through May and again in mid-September lasting well into October, these mayflies can hatch on any day during those two seasonal windows. Overcast days may see the strongest emergence, especially on the river between Emigrant and Big Timber. Sunny days can experience very strong hatches as well, but the ideal BWO day on the Yellowstone is overcast, with scattered showers, and air temps in the low 60s. Spring BWOs range from size 14 to 16 and fall BWOs range in size from 16 to 22.

The salmonfly is the largest aquatic insect to hatch on the Yellowstone River. Dependent on the end of snowmelt runoff, the salmonfly hatch on the Yellowstone River can occur anytime between late June and early July. On the Yellowstone River from Livingston to the Yellowstone Park Boundary, the salmonfly “hatch” occurs over the course of a few days. Nymphs crawl to the bankside structure and remove their outer shell—also known as their shuck. When this occurs an adult insect, complete with legs and wings, emerges. This typically occurs when water temperatures are in the 54 to 58 degree F range. These adults cling to structure until it is time to fly and find a mate. Once airborne males and females will mate, females deposit eggs on the surface of the water, and males will soon die. From migration to egg laying can take as long as three to four days. Weather, sunlight, and streamflow are all factors in the quality of fishing during a salmonfly hatch. Nymphs and adults (dry flies) range in size from 4 to 8.

Being able to fish the salmonfly hatch on the Yellowstone River is a matter of timing—as snowmelt runoff wanes the river must drop to a safe and fishable flow (usually below 10,000 cubic feet per second) and also have settled enough so the clarity allows for at least 8 to 12-inches of visibility.

These stoneflies may hatch concurrently with salmonflies and Golden stoneflies. Often mistaken for caddis or PMDs this small stonefly is a crucial part of a Yellowstone River trout’s diet. Yellow Sally stonefly nymphs become active in late June, with adult insects hatching from late-June well into early August. The nymphs range in size from 8 to 16, with size 10 and 12 being the most common. Because adult Yellow Sallies have very sporadic flying habits, trout rarely key on them, but the nymphs are consumed on a daily basis.

An abundant mayfly in the Yellowstone River from Columbus to Gardiner, hatches of Pale Morning Duns (PMDs) begin in late June and last all through July. Primarily found in the river’s riffles and longer runs, PMDs emerge when water temperatures hit 58 degrees F. PMDs hatch on sunny or overcast days and on the Yellowstone River they can hatch in either condition. Nymphs are available to trout year-round, but during a hatch, the hatching insects require time to allow for their wings to dry before taking flight, therefore being easily available to a sipping trout. Most PMDs are size 14 and 16, with size 16 being the most common.

These small mayflies are primarily important for dry fly anglers who enjoy casting very tiny flies—sizes 18 to 22—to rising trout. Tricos hatch at sunrise and an emergence rarely last longer than a few hours. They hatch from bankside structure or in riffles. Adult tricos swarm in mating swirls above the water, after mating they fall to the water and die, creating “spent” mayflies, also called “spinners'' by many anglers. These spinners float slowly on the surface and are picked off by trout. A trico hatch on the Yellowstone River doesn’t carry the aura of salmonflies or Golden stoneflies, but in late summer dry fly anglers can find trout rising to them.

These late season caddis are exciting to see, however, their emergence is sporadic. October caddis on the Yellowstone River can hatch as early as late September and will typically peak in late October. Compared to other hatches, an emergence of October caddis is paltry—these insects are rarely spotted in abundance. But an opportunistic trout may feast on one of these large caddis species if it happens to float by at that same time the fish feels hungry. Most October caddis are size 8 to 10.