The Mother’s Day caddis emergence is one of the most prolific aquatic insect hatches that anglers can expect to encounter on the larger rivers in Montana. This hatch is particularly strong on the Yellowstone River within Montana. The Mother’s Day caddis is an early season hatch that generally begins on the lower reaches of the river near Big Timber near the end of April and extends upriver to the upper reaches of Paradise Valley through mid May. The Brachycentrus genus of caddis, also referred to as the grannom, is a dark bodied caddis that hatches in the early season months. The larva build cases out of woody material that have a distinctive 4 sided angular case that resembles a box shaped ice cream cone..

Although this can be an incredibly thick hatch on the Yellowstone River, it can also be a fickle one. Anglers need to pay close attention to daily conditions and hatch cycles in order to maximize success when targeting this hatch. These tips will hopefully help to improve your odds when targeting the Mother’s Day caddis hatch. 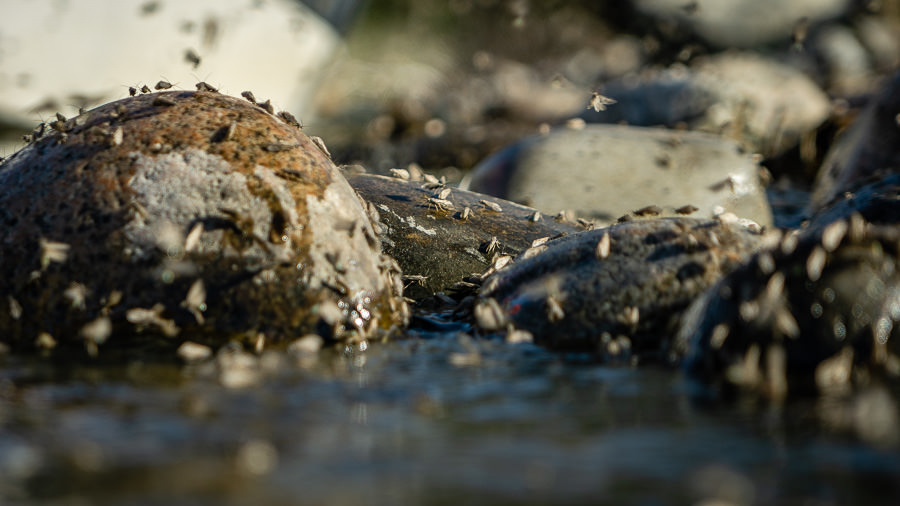 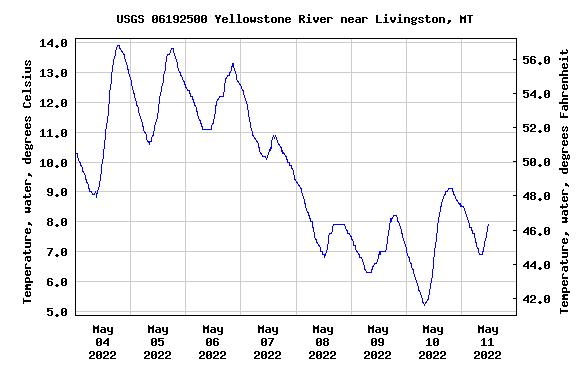 One of the great challenges on catching the Mother’s Day hatch on the Yellowstone River is to match up the right water temperatures with favorable river flows. Warm spring days that begin to regularly appear in late April and early May often result in a catch 22. You need the warm air temperatures to increase the water temperatures into the zone that the caddis need to hatch. The catch is that if the air temps are too high then it can trigger snow to melt which can increase river flows and lower water clarity. Each year the snowpack is different. If there is a lot of low elevation snowpack in the valley and foothills, the river can respond quickly with rising flows as soon as water temperatures increase. During years when the lower elevation snowpack has already burned off by late April you have a better chance of catching more high quality days on the river. The perfect scenario tends to be days in early and mid May when air temps are in the upper 50s to high 60s while the river is still stable. A 70 degree day is almost certainly going to start melting the snowpack. If the high temperatures rise quickly into the high 60s or 70s you may have a short window when the hatch explodes before the warming trend catches up with flows.

It is also important to realize that the river can rise but also fall in early May. If flows have been on the rise with the warming temperatures of spring all hope is not lost. If a spring storm moves in with colder temperatures that result in freezing nights at higher elevations it can suppress the snowmelt and river flows will fall again. When reviewing the hydrographs you will see a daily cycle of rising and falling water levels when the snowpack is melting, but after a cold front it will be a steady drop. Often the river will clear quickly after a cold snap and as soon as warm temperatures return you can enjoy another great day of caddis action. 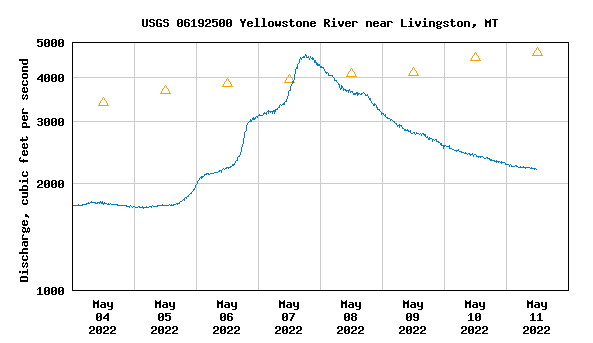 Tip 3: Understand how time of day influences the hatch

The rhythm of the emergence is important to understand if you are going to successfully fish the Mother’s Day hatch. Remember that the daily water temperatures are often fluctuating by 6-8 degrees from the early morning lows to the late afternoon highs. As previously noted, water temperatures tend to drive insect activity. Water temperatures in the morning are generally still in the high 40s and trout are relatively inactive in the early morning hours. When targeting the Mother’s Day hatch it pays to get a late start. Generally fish activity will begin to improve by the late morning as caddis and other aquatic insects become restless and more available to trout below the surface. Fishing a double nymph rig in the morning with at least one of the flies representing a caddis pupae is always a good bet.

Depending on the day, you can expect the actual hatch to begin anywhere from just after noon to late afternoon depending on the water temperatures. This can be an extremely heavy emergence when you catch it right and fish will have a lot of choice over naturals. Although you will see lots of adult caddis, the trout often still prefer the pupae or the stillborn adults either just below the surface or within the surface film itself. Pay close attention to the rise forms as you can often tell what stage of the insect the fish are eating by how they are rising. Often a pupae fished just 6 inches below a dry fly can be effective if you are targeting the early stages of the emergence.

Evening activity can also be very good when fishing the Mother’s Day hatch. The adults will generally return to the river to lay eggs in the evenings. Often the last hour before dark can produce some good action. 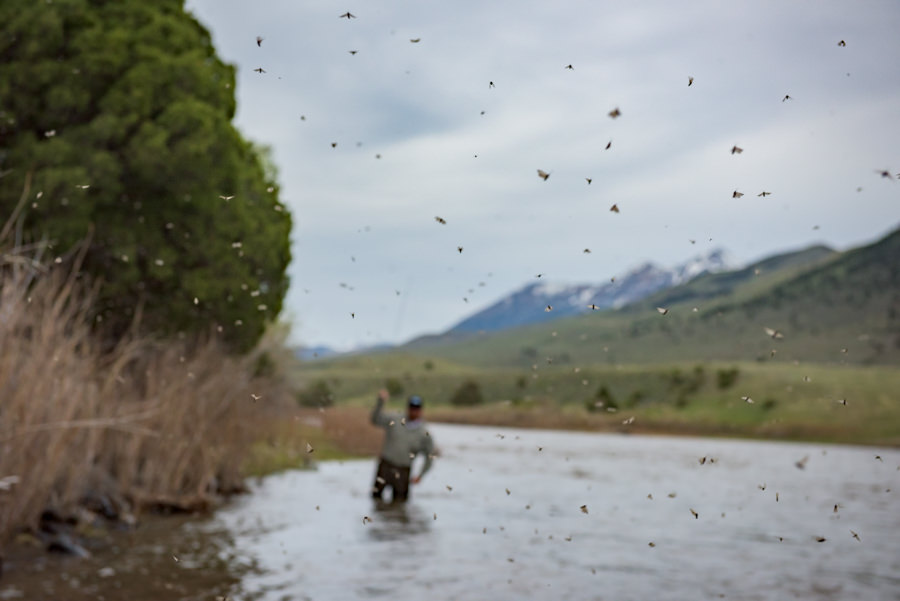 When the hatch is really heavy you need to pull a few more tricks out of your bag. Sometimes caddis appear as large mats on the water. During an especially strong emergence, if you select a pattern that is an exact imitation of the natural adult caddis, your odds drop substantially due to the fact that you are competing with thousands of naturals. Under these intense hatches it is best to have your fly stick out just a bit. One strategy that can sometimes help during the heaviest hatches is to upsize your fly a bit. The natural caddis is a size 14; try a size 12 or even 10 as an option to hopefully turn the head of a greedy trout gorging during the emergence.

Tip 5: Give your flies some action

All species of caddis are quite active in multiple stages of their life cycle and this is certainly true of the Mother’s Day caddis. Pupae rise swiftly to the surface upon emergence, adults hatch quickly and fly from the surface actively and the egg laying adults dance,flutter and dive at the water’s surface. Often simulating the active nature of the natural insect with some form of action in your flies can result in more strikes. When fishing pupae patterns allow the flies to swing at the end of a drift. When fishing dry fly imitations try throwing some exaggerated mends with your fly line to force the fly to hop and skate along the surface. One trick that can work wonders is to use a larger dry fly as a point fly and a smaller dry above. The larger fly can serve as the “anchor” due to its size and increased water tension. When mending the smaller fly will hop up and down above the water to simulate an active natural insect. Often these actively fished flies will induce some acrobatic rises from the trout which can add to the fun.

The Mother’s Day Caddis is one of the most exciting hatches of the entire year. Although timing the hatch is never a precise endeavor, by paying close attention to weather, water temperatures and water flows anglers will increase their odds of selecting the best days to chase the hatch.