For myself and many other local anglers, Montana’s fall run of Brown Trout is the most anticipated event of the year.  Large, lake dwelling trout begin moving into the river systems during late September and October and are accessible to fly anglers during this pre-spawn period.  Productive fishing will last as long as the weather (or in some cases, regulations) allows, usually sometime in mid-November.  This is far and away my favorite time to guide and fish in Montana, and having a shot at these big lake run bruisers is the main reason why.  While there are a myriad of places to catch a big fall Brown Trout in Montana, the Madison River ranks at or near the top of the list.  With 3 lakes along its course, Hebgen, Quake, and Ennis, the Madison offers 3 different runs within a close distance of each other, significantly more variety than you will find elsewhere.  The Madison has options to both float and wade, as well as to fish streamers or nymphs.  Additionally, the Madison has a fall run of Rainbow Trout as well, giving the angler more shots at large trout.  While some general rules and guidelines apply, each run of fish on the Madison is different, and learning and applying these nuances is what makes this type of fishing so much fun. 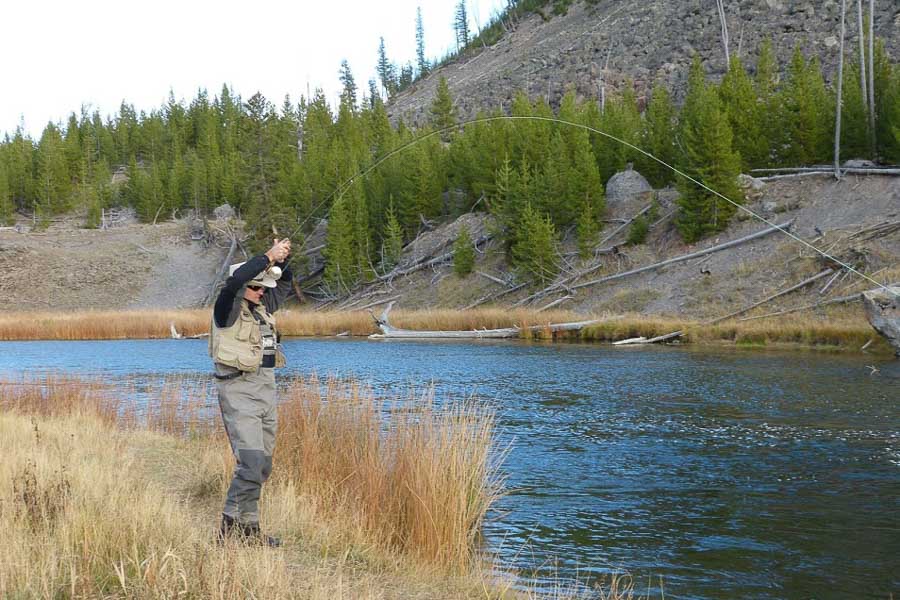 Techniques for Fall Run Fishing
No matter which section of the Madison you choose to fish, the techniques will be similar.  Fishing for these migratory trout is a nymph and streamer game, as they are not inclined to feed on the surface.  You will want to beef up your tackle for this kind of fishing.  When fishing from a boat, I prefer a 9ft 6wt or 7wt rod, and employ a sink tip when fishing streamers.  When wade fishing, I have converted to using a two handed switch rod in an 11’4” 7wt.  Long popular with steelhead fisherman, these 2 handed rods are quickly catching on with trout anglers.  The longer rod allows for easy roll casting and mending, as well as the ability to use longer leaders and more weight.  You can also employ various sink tips to swing streamers or wet flies, which is a very popular technique for Steelhead in the Pacific Northwest.  While a two handed rod is by no means a necessity for fishing the Madison, it is a fast growing segment of the fly fishing market and one that I have found very useful.  A 6wt rod between 9 and 10 feet will work just fine for wade fishing. 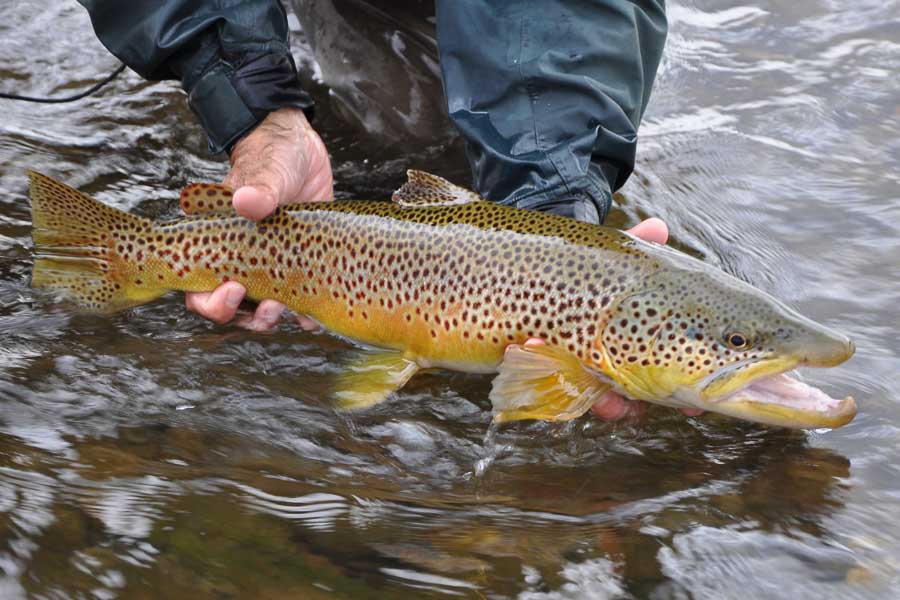 For flys, it is hard to beat a stonefly nymph trailed by a small mayfly when fishing under an indicator.  Choose dark, drab patterns that mimic a Blue Winged Olive nymph.  Stoneflys are effective in a wide range of colors so don’t be afraid to experiment.  Egg flies can be effective as well, especially late in the season when some fish have already moved onto the redds and there are natural eggs in the system.  Soft hackle flies, such as a soft hackle Pheasant Tail or soft hackle Hare’s Ear are also good bets and can be fished on a dead drift of swing.  For streamers, I like large articulated patterns if I am going to be stripping them out of the boat.  If I am going to swing streamers, I’ll choose a string leech or intruder style of fly.

Regardless of the technique chosen, the key to catching these migratory trout is identifying where they will be holding in the river.  Since these fish are used to living in a lake environment, the slowest, deepest runs you can find will be a good place to start.  These deep, slow buckets are an ideal place to nymph fish, especially at the heads of the run where the water begins to slow and deepen.  The most important thing in nymph fishing is getting your flies down in front of the fish.  If you are not bumping the bottom and getting snagged up occasionally, you are not fishing deep enough.  You will want to find a comfortable balance between leader length and the amount of weight you are fishing.  I typically use a 10ft leader when nymphing in the fall, whereas in the summer my nymphing leaders are only about 8ft.  Swinging steamers is most effective in shallower runs or at the tails of pools, where the water picks up some speed and isn’t quite so deep.  Steelhead fisherman will tell you that they look for water about the same speed as your average walking pace when they are looking to swing flies.  If you are going to strip streamers out of a boat, concentrate on structure along the bank as well as ledges where the water transitions from shallow to deep. 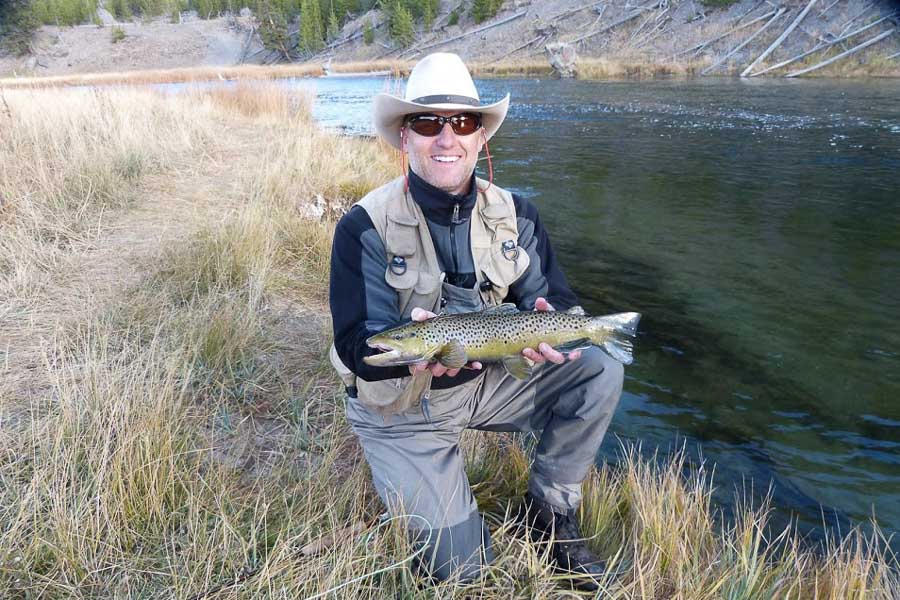 Fishing the Madison Fall Run:  Yellowstone National Park
The Yellowstone Park section of the Madison is the most popular area for fishing the fall run because it gets the highest number of fish that move into the river.  Both Browns and Rainbows begin to push out of Hebgen Lake in late September and will be in the river until the YNP season closes on the first Sunday in November.  Yellowstone Park does not allow float fishing, so this is strictly a wade fishery.  Both nymphing under an indicator and streamers are popular and effective techniques here.  The fall run is about evenly split between Browns and Rainbows, with the average fish going between 16” and 20”, with a fair number up to 22”.

The Madison in Yellowstone Park is a broad, shallow river so the most challenging aspect of this fishery is locating the runs that hold fish, which sometimes can be miles apart.  The most popular area, by far, is a group of deep runs located just inside the Park boundary known as the Barnes Pools.  This area is reached via a dirt road that is located just inside the parks west entrance at West Yellowstone, MT.  The dirt track splits before reaching the river, providing access to the upper and lower pools.  Immediately upstream is another nice area, known as Cable Car Run, followed by miles of shallow, unproductive water.  The river begins to deepen again towards its headwaters at Madison Junction, and you can spot productive runs from the car as the road closely parallels the river here.  There are some sneaky spots here and there that hold fish, and that is the reward for the adventurous angler who takes the time to learn the fishery. 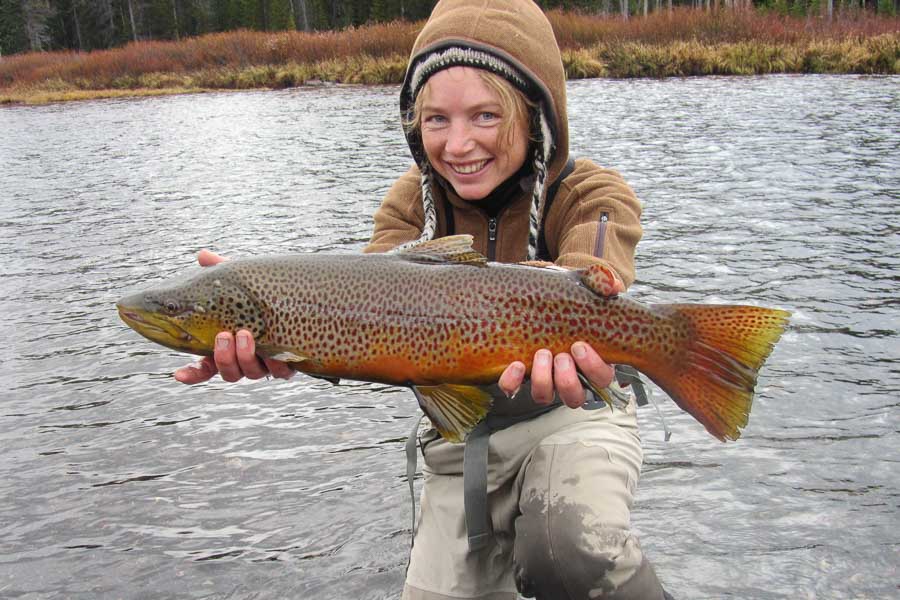 Fishing the Madison Fall Run:  Between the Lakes
In local angling parlance, “Between the Lakes” refers to the short section of the Madison River between Hebgen Dam and the head of Quake Lake.  Quake was formed in August of 1959 when a huge earthquake triggered a massive landslide that blocked the Madison River, killing 28 people in the process.  Dead trees break the surface to this day, an eerie reminder of the power of nature.  Though it’s barely two miles long, this stretch holds an extraordinary number of fish due to the fertile tailwater environment and close proximity to the lake.  However, the population is greatly skewed towards Rainbow Trout, so this section sees the fewest number of fall run Browns.  Though much fewer in number, this section holds the biggest Browns in the river.  In the spring of 2013, a dead Brown that measured 38” and weighed 35lbs was found in the area and several fish over 30” have been caught in the last few years.  While your odds of catching a fish this size are astronomically low, it is a good feeling knowing you are fishing water with such potential.  Realistically, you can expect good numbers of Rainbows in the 14”-17” class, with Browns up to 22”. 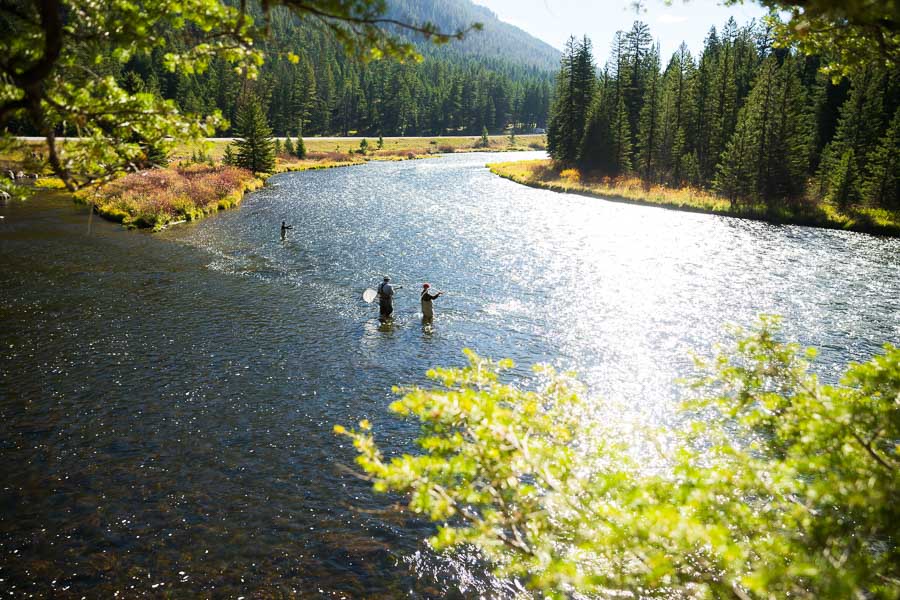 Between the Lakes is a swift, boulder strewn run that is best suited to nymph fishing.  In addition to the flies discussed above, classic tailwater patterns like a Ray Charles or Scud are worth a try in this section.  While this water doesn’t look anything like the Missouri or Bighorn, the same types of fly patterns will work.  The key water type to look for here is the slack water on the backsides of current obstructions such as rocks or islands.  While there are a few nice deep holes, don’t get stuck on the depth of the water too much.  It such a swift section of river, finding water that is the right speed becomes paramount, even though migratory fish typically gravitate towards slower, deeper water.  This entire section of river is basically roadside, so it is quite easy to scope out and pick a good spot.  This section of river is open year round, so it is a good option in November after Yellowstone Park closes.  The run here starts a bit later than the other two sections as well. 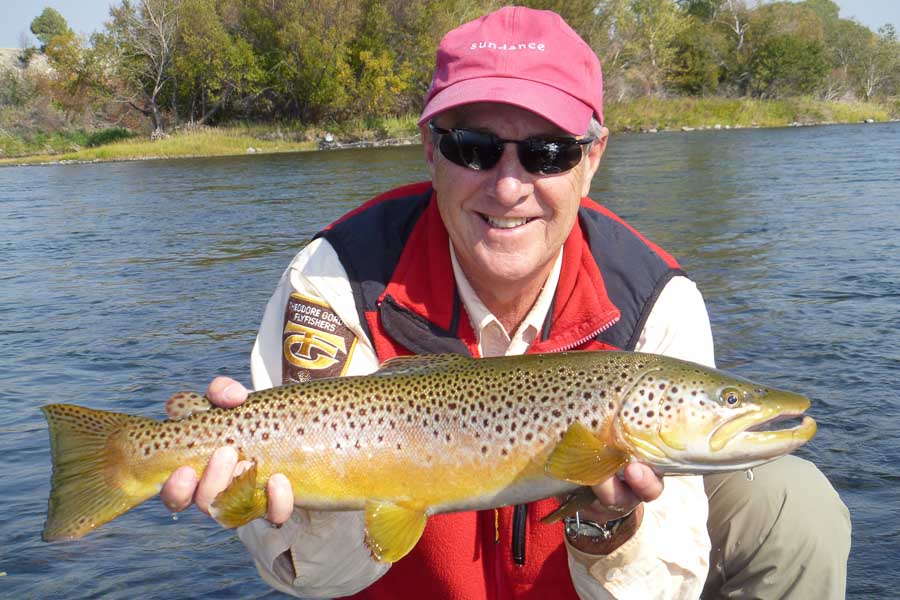 Fishing The Madison Fall Run:  Varney Bridge to Ennis Lake
If you are interested in fishing out of a drift boat, then the section of river from Varney Bridge down to the town of Ennis is where you want to be.  From town down to Ennis Lake, the river is restricted to wade fishing only.  Access here is tough as the river is in a bit of a willow jungle, so the preferred strategy is to use a boat to move from hole to hole, which is allowed as long as you exit the boat before you start fishing.  Fish will start pushing into this section in mid-late September, and by mid-October will be dispersed throughout the river quite a ways upstream.  The number of fish here is somewhere between Yellowstone Park (the most) and Between the Lakes (the least).  Pressure is less here as well, given the necessity of a boat to reach much of the fishing.

When float fishing from Varney to Ennis, I prefer to strip large streamers with a sinking line.  The river twists and turns through the willows here at a pretty good clip, so the rapid fire nature of streamer fishing suits it quite nicely.  You can certainly nymph fish here, but even so I like to choose a small streamer as my point fly even though I will be dead drifting it under the indicator.  The fast current will impart action on the fly and it makes having a perfect dead drift less important.  The river braids quite extensively here, so a skilled oarsmen with local knowledge is important, as some channels contain logjams, dams, and other obstructions.

I like to nymph fish down below Ennis, as again this section is restricted to wade fishing only.  This section, known locally as “The Channels”, has even more islands and side channels than the Varney to Ennis stretch.  The river is typically shallow here, with the deep runs getting most of the attention.  There are plenty of sneaky spots to be found.  As such, it takes a long time to learn this section well.  Another interesting aspect of floating The Channels is that the boat ramp you use to take out is actually on Ennis Lake, requiring you to row almost a mile across the lake.  It’s wise to check a wind forecast before committing.  If you want to wade fish, the best access is the Valley Garden Fishing Access Site, which is just downstream from town.  It’s kind of a jungle in there, but you can hike both upstream and down.
Share this post: