As a fishing guide in Yellowstone National Park, I am often asked questions like, “Where can I fish close to West Yellowstone in August?” or “What rivers near Gardiner fish well in early June?”.  I pick these examples because, frankly, you would be very disappointed with the answer to each one.  While Yellowstone Park is justly famous for its trout fishing, it is a very seasonal affair. You can find good fishing in the park every day of the fishing season, but no single river drainage fishes well for the duration of the season. Given that Yellowstone encompasses 2.2 million acres and sees over 3 million visitors per year, you can find yourself facing significant travel time to productive fishing if you do not plan your stay accordingly.

The two factors that drive fishing in Yellowstone are snowmelt, which is true all over the West, and the effect of thermal heating and thermal runoff, a situation unique to the park. Streams that are heavily influenced by snowmelt will not be low and clear enough to fish until sometime in July. On the other hand, streams that drain thermal areas will be too warm for fishing during mid-summer. Understanding this dynamic will help you to make sure that you are in the right place at the right time during your Yellowstone fishing trip. 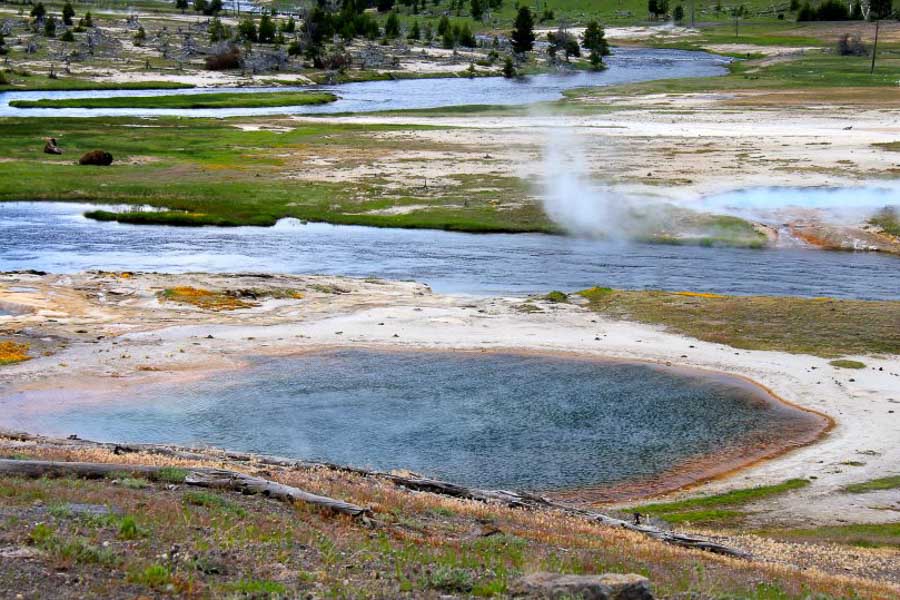 Early Season: Late May thru Late June
Without a doubt, the Madison drainage is the place to be during Yellowstone’s early season. When the season opens over Memorial Day weekend, the Firehole River will be fishing well, and it is often the only river in the park that is fishable.  Both the Gibbon and the Madison River will begin to fish well within about a week of the opener. Good mayfly hatches are a common occurrence in June, allowing anglers to toss dry flies while many rivers around the West are choked with runoff.  Around the middle of June, several lakes in the Gibbon drainage like Grebe Lake and Cascade Lake will become accessible and the bite will be hot. The Firehole also offers several tributaries that hold fish, such as Nez Perce Creek, that can provide some variety to a trip.

The town of West Yellowstone, MT is the hub of early season fishing activity. From West Yellowstone, you can be on the Madison within 10 minutes and the Gibbon and Firehole within 20.  If you wish to stay inside of the park, camping at Madison Junction puts you right in the middle of the action. Old Faithful is a good choice as well, as the Firehole River is just minutes away. 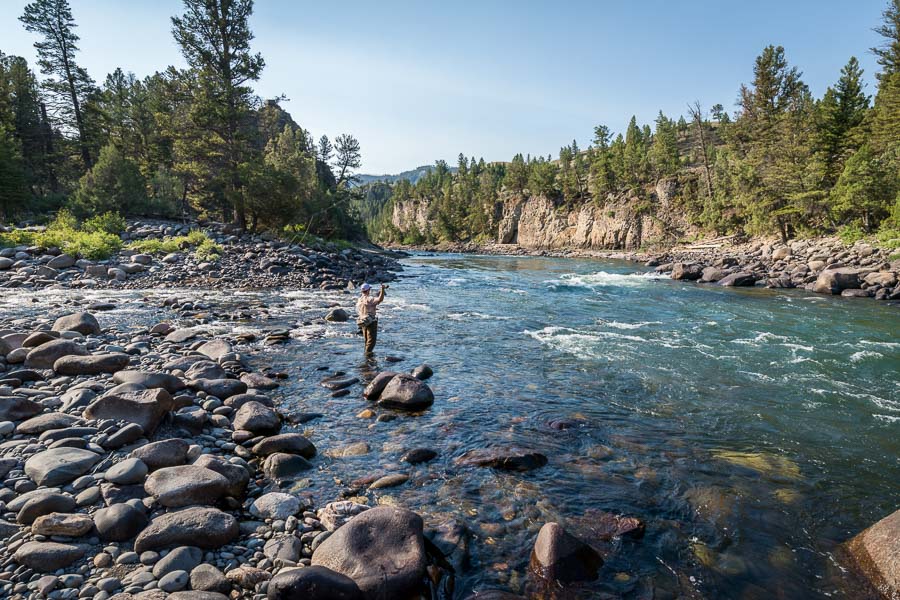 Transition Time: Late June thru July 4
The last week in June marks the transition from spring to summer fishing in the park. The waters of the Madison drainage are becoming too warm for good fishing, especially in the afternoons. This can be a tricky time, as the Lamar drainage is not quite ready yet. Fortunately, the Gardner River provides a good option during this time frame. The river will just be dropping into shape and the Salmonflies and Golden Stones will be starting to hatch.  Trout Lake, which opens to fishing on June 15th, is a good option during this time frame as well. If it has been a lean snow year, it is possible that the Yellowstone River may be fishable as well.  You shouldn’t count on this, but be prepared if the opportunity presents itself.

The town of Gardiner, MT makes a good base during this transitional period. You can be on the Gardner River in a matter of minutes and Trout Lake, in the Lamar drainage, is a manageable day trip. The Yellowstone flows right thru town, and you are close to good access if it is in fact clear enough to fish. 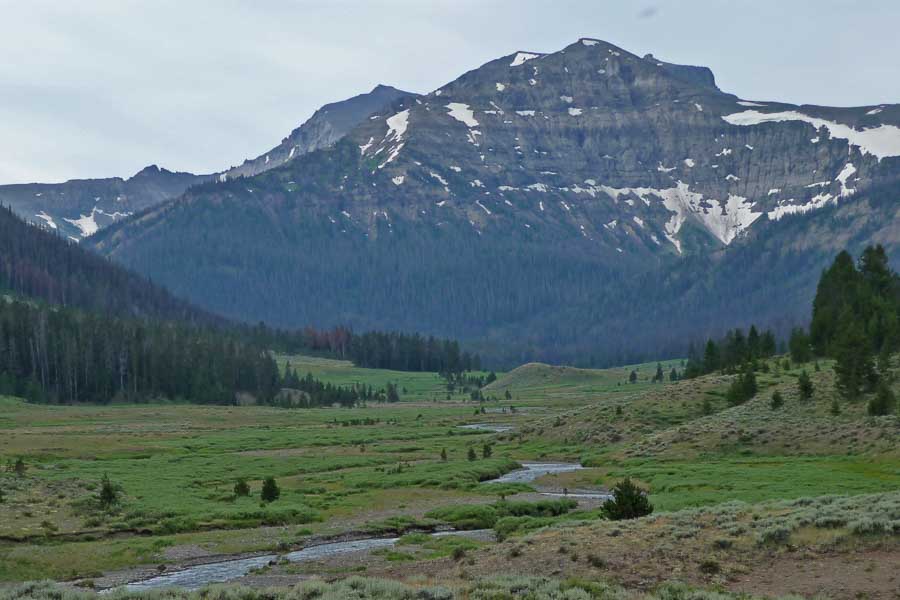 Mid Summer:  July 4 thru August
The entire northern portion of Yellowstone Park will fish well in this time frame, giving the angler plenty of options. The Gardner and Yellowstone will fish well early on in July, with Slough Creek, Soda Butte Creek, and the Lamar River gradually becoming fishable in that order. The Lamar is usually fishable by mid-July, but won’t be ready until the end of July after a winter of above normal snow. This is the time of year to fish terrestrials, and hopper fishing is something that serious anglers look forward to all year. During August, the above rivers are still fishing well, but fishing pressure can be high.  This is a great time to get out the hiking boots and check out some of Yellowstone’s small creeks and backcountry waters.

The best mid-summer bases are out of Gardiner, MT and Cooke City, MT.  Cooke City is very convenient to access Soda Butte, Lamar, and Slough. Gardiner provides easy access to the Gardner and the Yellowstone, while the Lamar Valley is a manageable day trip.

Early Fall:  September
September is an interesting month, as it can be warm and sunny or snowing, sometimes both in the same day. This is another time of transition in Yellowstone Park.  During early September, the Lamar Valley streams are still fishing, though the fish are quite spooky as they have been fished hard all summer. By mid-month, the waters of the Madison drainage will have cooled enough to fish well again.  Both the Yellowstone and Gardner River should fish well all month.

If you are visiting in early September, Gardiner, MT is probably the best base. The Yellowstone and Gardner will fish consistently, and you can make the day trip to the Lamar Valley if it is fishing well.  Towards the end of the month, West Yellowstone would make a good base as well. The Firehole will be fishing well and some early migrants will be showing up in the Madison from Hebgen Lake. While this run peaks in October, a few fish will be present later in September. 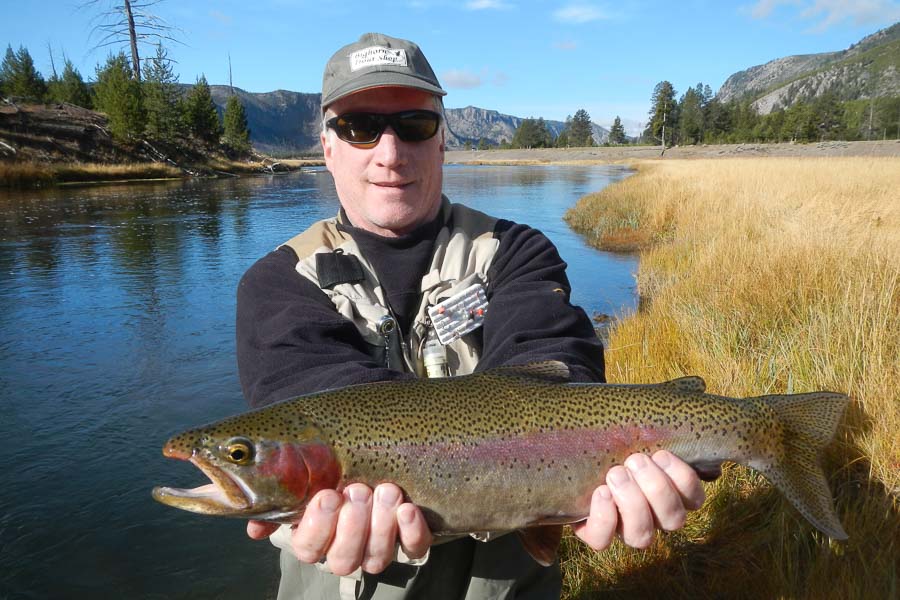 Late Fall: October thru early November
Just as it was at the start of the season, the Madison drainage is the place to be for the last month, up until the season ends on the first Sunday in November. Large trout push out of Hebgen Lake on their spawning run, giving anglers the shot at the biggest fish of the year.  These fish are available in the Madison River as well as the lower reaches of both the Gibbon and Firehole. Target these fish, which average between 16” and 20”, with large nymphs and streamers.

On the Firehole River above Firehole Falls, hatches of Blue Winged Olives draw fish to the surface all the way to seasons end. The Firehole provides a great change of pace to chasing the big migrants during the fall. As in June, West Yellowstone, MT and the surrounding area is the place to be in October.
Share this post: