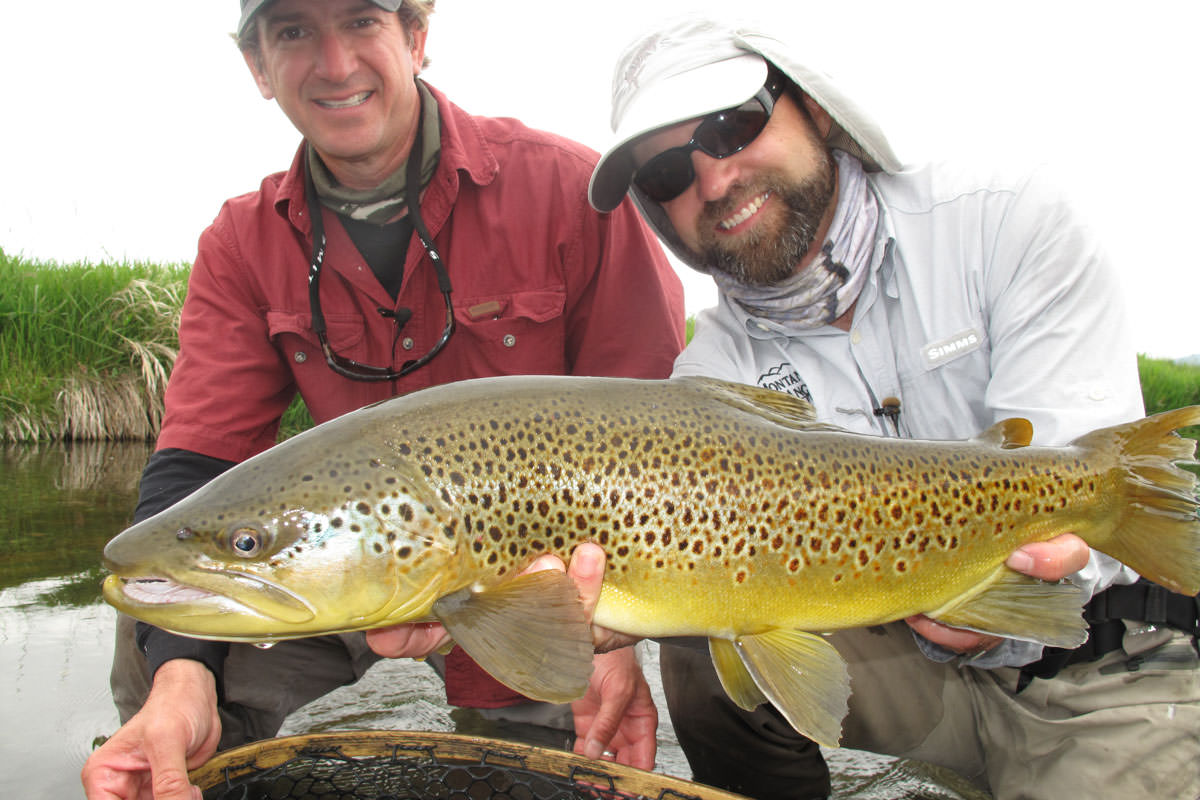 Trout are now in the mode of a maintenance diet and their metabolism is directly tied to the water temperature which means it is slow. Most of the fish are well entrenched in their winter runs. This time of year you need to have laser focus on where you fish and target the deeper runs with slow to medium currents. Trout will no longer be found in the fast riffles or bustling pocket water that was so productive in the warmer months. The good news is that once you find some of these winter time honey holes they will be packed with trout. Fish densities in the best winter runs can be staggering with dozens upon dozens of trout stacked together.

Nymphing is hands down the most effective technique in the cold winter months (although streamers and even dries can still be an option). The fly selection doesn't have to be fancy but will vary from fishery to fishery. On the bigger freestone rivers such as the Gallatin and Yellowstone it is nice to still fish something larger as the point fly such as a stonefly nymph, crayfish pattern, or sculpin trailed by a smaller nymph. For small nymphs shoot for something in the 18-20 range. Patterns that produce include small baetis emergers, pheasant tails, and midge larva. San Juan worms and eggs are also good patterns to try. If you are fishing a tailwater or spring creek a sow bug can be productive (especially in pink). The reality in the winter is where and how you fish is more important than the pattern.

On a mild winter day you might be lucky enough to run into some rising trout feeding on midges. Even freestone rivers like the Gallatin will produce some sporadic midge hatches, especially on mild days. If the hatch isn't too strong dries that imitate single midges such as a palomino pattern are more productive. On tailwaters like the Big Horn and Missouri the winter midge hatches can be thick in the late morning and the insects will cluster together so many of the patterns such as the Griffiths gnat that imitate these "rafts" of insects can be more productive than single insect patterns.

Time of day is also important this time of year. Early mornings are generally very tough fishing. The magic window in the winter is from around 1:00 PM until 4:30 or so when the water temperatures are peaking.

Midge hatches can be strong in some locations in the late morning and early afternoon when warmer mild weather settles in. Otherwise the fishing is a nymphing game.

Fly selections is simple in the colder months. If there is a midge hatch choose your favorite midge dry or cluster pattern. Palomino midges and Griffith's gnats are good enough. For sub surface try a rubber legs, egg, or worm pattern on top and a smaller midge larva or baetis nymph on bottom.

Water temps are cold and trout have moved out of the heavy water and riffles in favor of softer holding water. Trout will be heavily concentrates in large, slow runs and nearly absent everywhere else. It pays to skip a lot of water and only focus on these slower runs. Fish slow and deep in the peak afternoon hours.