Fly Fishing for your first permit

Fly Fishing for permit often becomes a lifelong endeavor. But before anglers become consumed with hunting, stalking, casting, and hopefully hooking, you'll need to catch your first permit. Like so many other things in life, not angling related things, the first time is the most memorable. Do you remember your first kiss? Your first date with your spouse? Your first trout on a dry fly?

That's why it is increasingly important to work with an expert... at least as expert as one can be while fishing for permit.

For the past twenty years, I have been fishing around the Caribbean in search for the ultimate permit fishing locations. My travels have found me in Cuba and the Bahamas. I've spent an extensive amount of time in the Mexican Yucatan and Belize. I’ve used my experience to help anglers accomplish their dream of catching their first permit... that is to say, that I put them in the right place, at the right time, with the right guides (the most important element).  Here is my list of the Top 3 place to catch your first permit on a fly. 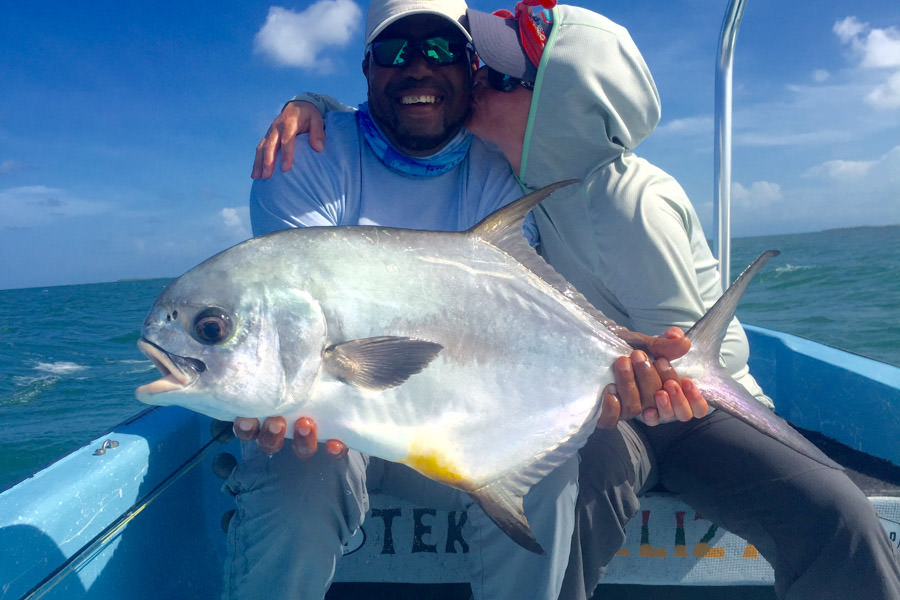 Southern Belize is well known as one of the top fisheries for permit any where in the Caribbean. The southern town of Punta Gorda is nearly as far south as you can get. On a clear evening, you can see the mountains of Honduras on the southern horizon. To the north many square miles of pancake flats and mangrove islands pepper the Port of Honduras Marine Reserve. And thousands of permit come onto the those flats at high tide to feed.  When they are not on pancake flats, the lagoon to the far north is an excellent choice.

PG (as Punta Gorda is known) and it's fisheries to the north are fished and guided daily by the famous Garbutt family. A family of commercial anglers turned catch and release advocates. Many years ago they recognized that harvesting fish everyday for weeks, months, and years would have negatives effects to the fishery and their quality of life. So when they were introduced to catch and release fly fishing as a commercial/career opportunity, they embraced the opportunity and helped create the Marine Reserve. Since that moment over 2 decades ago, Scully, Oliver, Eworth, and Dennis, developed a knowledge of permit. The know where they will be and what they will eat. Many thousands of permit have been brought to the boat. Some permit have been tagged in an effort to research the fishery and help preserve it for years to come.

While fishing in PG, you can expect to see many schools of 6-10 pound permit on the pancake flats. A few larger singles will also show themselves. If the fish are not on the outer pancake flats, they are likely to be found in the northern lagoon. In the lagoon anglers will have shots at singles, doubles, and small schools. The bottom in the lagoon is commonly a soft mud bottom, with little to snag a fly on. This is aspect makes it a great choice for permit anglers of all abilities. When the conditions are just right, the stars align, and the permit react, anglers can expect to see some of the biggest permit in the caribbean feeding near the outlet of the lagoon.

There are two lodging options in PG, Belcampo and Garbutt's Marine. When you stay at Belcampo there will be no sacrifice on comfort, meals, or hospitality. The experience at Garbutt's Marine is rustic, what is lacking in luxury is made up for in personal attention and family feel. 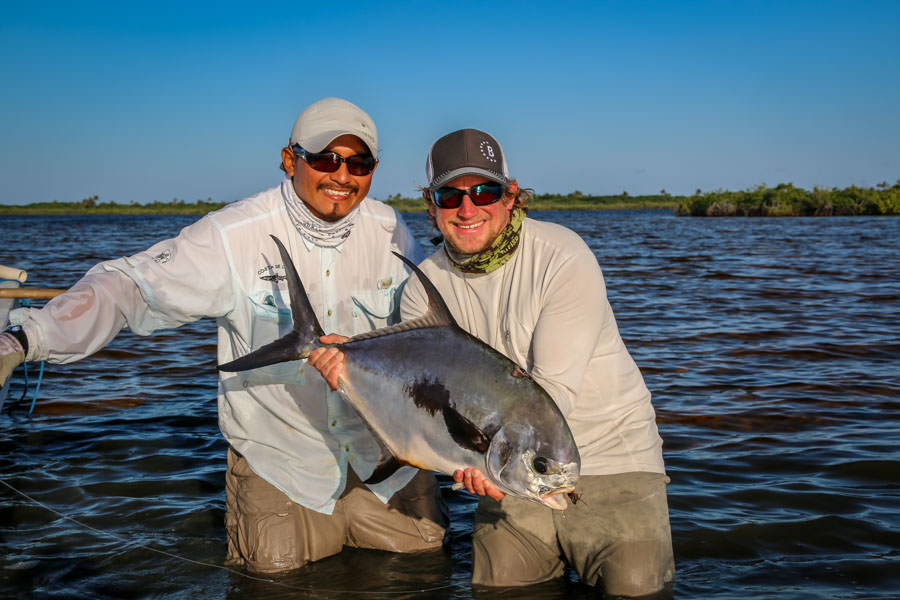 One of our favorite places in the Caribbean to fly fishing for permit and catch your first permit is Xcalak Mexico. Located at the end of the road (literally), Xcalak is a small fishing village near the Mexico Belize border. To the north, the Meso-American reef begins it's journey south into Honduras. The hustle and bustle of San Pedro (an hour+ boat ride to the south) doesn't make its way this far north. It is uncommon to see other anglers on the flats in the bay.

The bay islands and back country flats a short boat ride to the south of Xcalak are home to all scenarios of fly fishing for permit. Anglers should expect to see cruising singles, doubles, and triples. Large schools of juvenile permit make their home here. Big tailing permit can be found digging up crabs in the soft white sands. You may see a permit on the back of a sting ray. You may encounter fish feeding on the reef or the turtle grass flats on the outer coast. If you can think of a permit fishing scenario, this is the place you will be most likely to see it.

The permit fishing in Xcalak is all about increasing odds. More good clean shots are permit will be had here than anywhere else I have fished. The increase in shots, increases the likelihood of a permit eating your fly and being landed. More, there is another unique fishery in Xcalak.

In the afternoon hours, it is common to see large muddy areas of frenzy feeding bonefish, small jacks, snapper, and sting rays. These areas are known as 'muds'. These are common in northern Belize as well, but are more commonly fisher over to get novice anglers into bonefish. In Xcalak, the giant muds attract permit. Large singles, groups of two to three, and/or big schools seek out the muds and the food being kicked up off the bottom. A bonus is the cloudy water tempers the spookiness of the permit, allowing anglers the advantage.

It is more common than anywhere else to have a multiple permit fishing day on the flats near Xcalak Mexico. For this reason it is nearly our top pick to go fishing for permit, with the goal of catching your first permit.

There are a few different options of locations to stay in Xcalak, but we prefer Costa De Cocos. The comfortable rooms, great food, and warm hospitality are complemented by the best value in permit lodges anywhere. 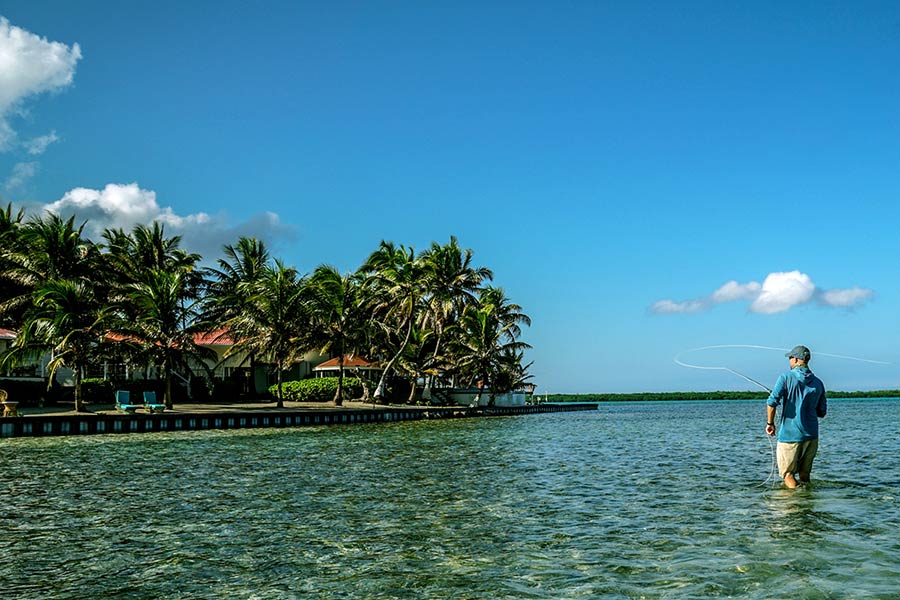 Ask a dedicated permit angler where the best place to catch a permit is, and you will likely hear 'Belize'. The country is held high the permit fishing world for its famous permit fishing flats. From the pancake flats of southern Belize to the northern border stretching into Chetumal Bay, Belize is home to thousands of permit. Every year hundreds of permit are caught in Belize, and a strong argument can be made that more permit are caught on Turneffe Atoll than anywhere else in Belize. And more anglers have caught their first permit at Turneffe Flats lodge than anywhere else in the Caribbean.

Located 30 miles off the coast of Belize, the atoll is its own eco-system of reefs, channels, mangroves island, and lagoons. It is the perfect habit for all ages of permit. The remote location and the vastness of the atoll are crucial to the productivity of the fishery. Ranging 30 miles north to south and 10 miles east to west there are many square miles of fishable water.

The permit fishing on Turneffe Atoll is best broken into two styles. The traditional 'spot and stalk' style and the unique lagoon fishery. As the name suggests, the spot and stalk style mostly done from the front of the boat (or while wading the shallow flats). Once you and your guide identify a feeding, cruising, or laid up permit, you'll make a cast to intercept the fish with your fly. A good eye and a quick accurate cast are critical to catching a permit. This adds a level of difficulty to the style, but increases the specialty of success. For this reason, many seasoned anglers who fly fish for permit prefer this method.

A curious and unique fishery exists only in the lagoon at Turneffe Atoll. It is unique because of the style of hunting, and because of the opportunity. In the lagoon, large school of 50+ fish on all sizes cruise and feed in deeper turtle grass flats. Our guide will hunt for the school with the boat under power, sitting on the polling platform and steering with his feet. Once a school is spotted, he will out maneuver the school, kill the engine, and move the boat into position for a cast. Curiously unique to this location, the permit are careless of the boat and will allow the guide to push the boat close to the school. The need to place a long distance cast is uncommon in the lagoon. Unwary, the school will hold and feed longer than schools of permit elsewhere. Anglers can typically get multiple shot at the same school before it spooks.  When it does spook, it won't go far before settling back into a feeding pattern. This gives anglers opportunity to try different flies, different retrieving rhythms, and sometimes catch more than one permit from the same school. More first time permit anglers have landed their first permit in the lagoons of Turneffe Atoll than anywhere else in Belize.

Turneffe Flats is one of the oldest fishing lodges in Belize. It opened the doors in the early 80's and has been fulfilling first permit dreams ever since. The guides at Turneffe Flats are the most experienced on the atoll (and in Belize). The lodge is surprisingly luxurious, especially for the remote location. And, it just happens to be the closest lodge to the lagoon fishery. A short 10-15 minutes skiff ride will put you in the heart of the prime permit flats in the Turneffe lagoon.

This is the a great choice for an angler who's goal is to catch their first permit. Turneffe Flats is an easy choice for anglers who are traveling with family or a non-angling spouse. The snorkeling and scuba diving on Turneffe Atoll rivals any other location in the world. 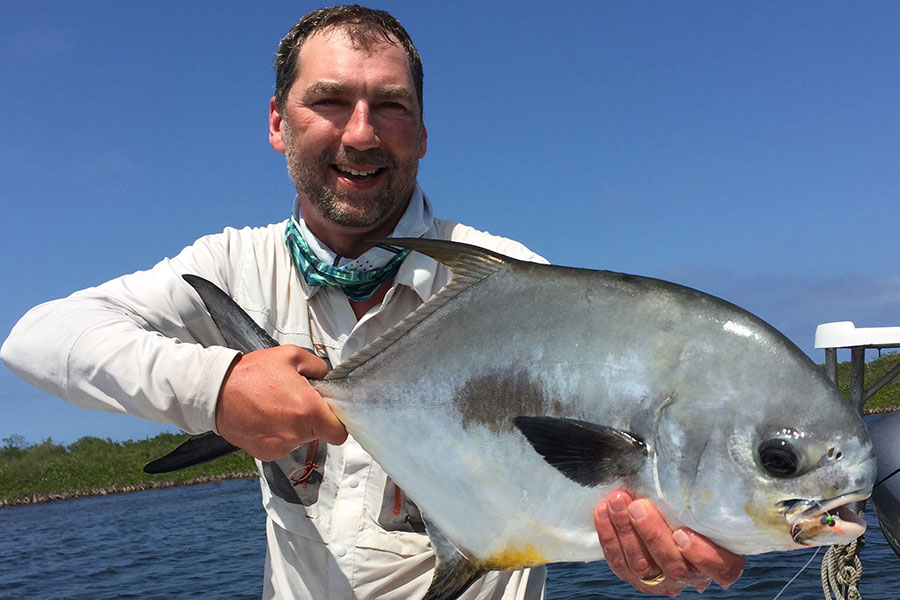